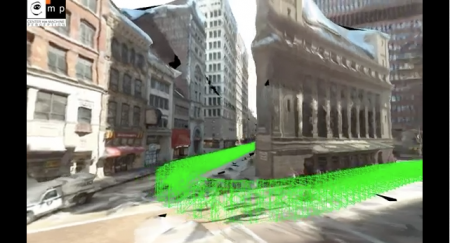 OpenStreetMap (OSM) project founder Steve Coast has announced that he has joined Microsoft to work on its Bing Maps team. According to Coast, Microsoft will be providing access to its “global orthorectified aerial imagery to help OpenStreetMappers make the map even better than it already is”.

The new release of the free Landscape Scenery Globe Biosphere3D adds rendering effects such as ambient occlusion, shadow mapping and creation of camera paths and capture of animations.

The very useful GIS tool MapViewSVG has been renamed “Mappetizer“. According to the developer, the latest version Mappetizes 8.1 additionally has integrated support for OpenStreetMap (OSM) data (example). Yet, we didn´t have the opportunity to test this new functionality but considering our interest in open source solutions and especially geodata under creative common licenses such as OSM, we are curious about testing Mappetizer 8.1 as soon as possible.

Biosphere3D is now available at Sourceforge:

Virtual 3D city models are getting more complex, detailed, and increasingly large. Therefore, good solutions for the storage and the management of 3D city models are needed. Within this context we want to inform you that there is now a 3D database schema for the storage and management of CityGML-based 3D city models freely available, which can be implemented on top of Oracle 10G/11G. It also works with the Express version of both databases, which is free for use for educational and research purposes. The following is a rough translation of the German press release.

The departement for Geodesy and Geoinformation Science, Berlin Institute of Technology, German has realesed free software tools for the management and storage of CityGML-based virtual 3D city models. The tools include a 3D database schema for the use with Oracle 10G R2 or 11G, an Importer/Exporter, and a Java class library for facilitating the work with CityGML. The package is released under the Lesser GNU Public License v3 and can be downloaded under the following URL: www.igg.tu-berlin.de/software. An English documentation is also available.